The ‘Olympics’ of ultra-trail running has arrived with the Ultra-Trail du Mont Blanc (UTMB) 2017 starting this week! 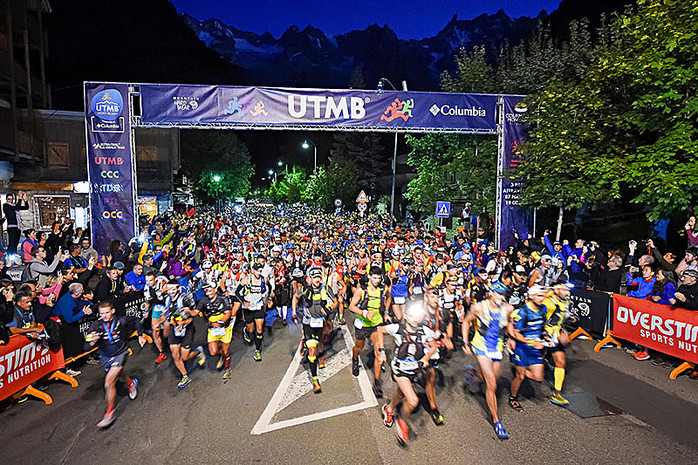 
The Ultra -Trail du Mont Blanc (UTMB) is an iconic route of about 170 km that passes through France, Italy and Switzerland, circumnavigating Mont Blanc with 10,000m of ascent, to be completed in 46.5 hours. Have a look at our short video here.

While the event has a relatively short history, it has already established itself as what many see to be the pinnacle of ultra-trail running. To the non-runner it may seem surprising that people should do this sort of thing for fun. But for many runners, the Ultra-Trail du Mont-Blanc (UTMB) has iconic status, it appears on countless bucket lists and every year runners from around the world make a pilgrimage to Chamonix to take part in the week-long festivities.

Below are the best-known races taking place this week, listed in order of starting times:

The PTL is a mostly self-supported run without course markings or aid stations. Runners rely on a limited number of support points, mountain huts, local stores and restaurants for food and sleep. The course should be followed by GPS, maps, and the road book. It goes as high as 3300 metres and must be completed in about 6 days. Each team of two or three people carries a satellite beacon for safety. The course is modified every year and there are no official winners.

Established in 2009 this race takes place in open country along the 'Grande Randonnée' paths crossing though the Mont-Blanc, Beaufort, Tarentaise and Aosta Valley countryside.

Starts: Wednesday 30th August at 6am, the official starting point is in Courmayeur at Piazza Brocherel

Established in 2014 the OCC is perfect for fans of medium (Ultra) distances, for those perhaps wishing to enter the UTMB race itself in the future.

Established in 2006 the CCC has climbed from being the "little sister of the UTMB" to becoming a unique race that is one of the most prestigious in the world. Being a CCC finisher allows you to be classified on the Ultra-Trail World Tour (UTWT) 2017 points sheet.

Starts: Friday 1st September at 9am, the official start point is in Courmayeur at Place Brocherel

Established in 2001 this route basically follows the Tour du Mont Blanc hiking path, that is usually completed in 7 to 9 days by hikers around Mont Blanc.

See the full timetable of events on the UTMB website here

Keep your eyes peeled for the official favourites chosen by and published in this year’s UTMB 2017 programme:

The Official UTMB corporation Elite Males favourites:
1. Jim Walmsley (USA) UTMB
#942
Jim Walmsley aka ‘The Big Show’ possesses a huge amount of running talent, but that’s yet to convert into a meaningful result. He’s killing everything at 100km and below and maybe that’s where his real talent lies, but he definitely has the skills and the tools to win this year!
2. Kilian Jornet (ESP) UTMB
#932
There’s a real sense of the Euros versus the Americans again, as tends to happen at the UTMB. With Sage Canaday, Jim Walmsley and even underdog Zach Miller in the field the 29yr old Spanish alpinist Killian is the only Euro with a real “betting” chance and Sportsbet have stopped taking bets on “An American Gold” scenario again this year.
3. Sage Canaday (USA) UTMB
#923
Sage is an open book endurance runner; self-coached and very public with his training he posts most of his workouts on the activity-tracking website Strava. He dropped out of the of UTMB in 2015 with a knee injury but has since added these wins to his belt: 3rd HK 100km 2017, 1st Lake Somona 50 mile 2017, 3rd Speedgoat 50km 2017, 3rd Transvulcania 2016.
The Official UTMB corporation Elite Females favourites:
1. Caroline Chaverot (FR) UTMB
#806
Caroline Chaverot won everything in 2016 and was named female ultra-runner of the year. UTMB, UTWT and World Trail Champion she is a dead cert favourite to make it two years on the trot.
2. Megan Kimmel (USA) CCC
#799
Colorado native Megan Kimmel has been dominating the trail running scene for years.  Her triumphs include a second place finish in the international 2015 Skyrunner World Series.
3. Stevie Kremer (USA) OCC
#798
Stevie is a primary school teacher in her home town of Crested Butte, and is expected to school us all this week in perfect form.
« Back to Blog List