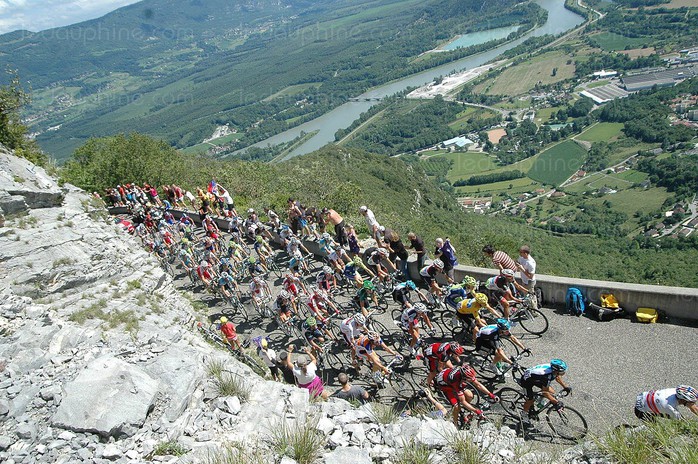 Sunday, 9 July 2017 is the 9th stage of the Tour de France finishing not far from Chamonix in nearby Chambery.

This year, race director Christian Prudhomme has been inspired by the 6th stage of the Critérium du Dauphiné; creating a stage for pure climbers with the Grand Colombier tackled from the Virieu-le-Petit side – featuring 4200m’s of climbing!

It is the first time the finish line has graced the “City of the Dukes”, which hosted an historic departure in 1996. That year en route to Les Arcs, the Yellow Jersey, Stéphane Heulot, was forced to drop out of the race with a knee injury. The climb to the station then came to mark the “fall” of the Indurain era when the five-time winner (Spaniard Miguel Indurain Larraya) caved to younger pressure after a tour marred by sickness and penalties.

The route from Nantua to Chambéry takes in seven intermediate climbs, three of which are hors catégorie. This includes “The Col de la Biche”(a challenging ascent of 10.5kms at 9%), and “the Grand Colombier” (8.5kms at 9.9%), which are both packed into the first half of the race.
With some 35 kilometres remaining the final climb of the “Mont du Chat” takes yet more grit from these incredible athletes. The “Mont du Chat” is 8.7kms and averaging 10.3%. After topping the “Chat” the extremely technical descent awaits before the triumphant arrival in Chambery. The first three riders in Chambery take time bonuses at 10, 6 and 4 seconds.

In the Dauphiné Brit Chris Froome put huge pressure on three young (climbing) bucks who escaped the pack; Richie Porte, Fabio Aru and Jakob Fuglsang. But despite his impressive downhill speed the vet couldn’t quite make it to the finish line first. Jakob Fuglsang bested Richie Porte in a photo-finish, while Chris Froome finished in third.

You can join the crowds and excitement at the finish line of this grueling stage not far from your stay in Chamonix!
https://www.rome2rio.com/s/Chamonix/Chamb%C3%A9ry
The route from Chamonix to Chambery can take between 1.5 to 4.5hrs depending on your mode of transport.
We recommend driving, a comfortable 1hr30 by car, you can stop on the way at beautiful Annecy with its stunning lake and Venetian style “old town”.

Take a look for yourself at the stage on Youtube.
You can take on some of the routes from the 2016 Tour De France during your Chamonix stay too, have a look at our advice from 2016 here.
« Back to Blog List